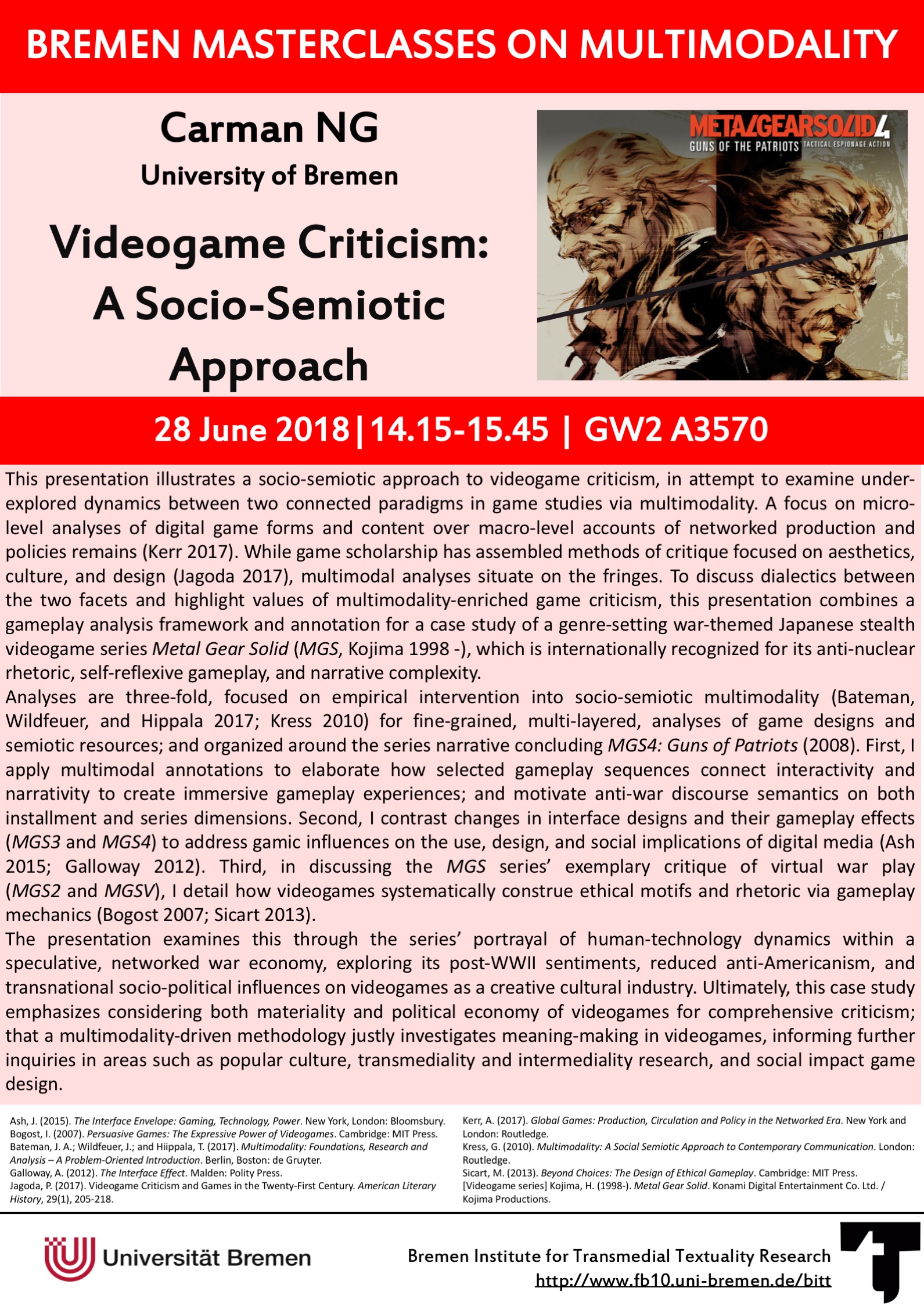 This presentation illustrates a socio-semiotic approach to videogame criticism, in attempt to examine underexplored dynamics between two connected paradigms in game studies via multimodality. A focus on microlevel analyses of digital game forms and content over macro-level accounts of networked production and policies remains (Kerr 2017). While game scholarship has assembled methods of critique focused on aesthetics, culture, and design (Jagoda 2017), multimodal analyses situate on the fringes. To discuss dialectics between the two facets and highlight values of multimodality-enriched game criticism, this presentation combines a gameplay analysis framework and annotation for a case study of a genre-setting war-themed Japanese stealth videogame series Metal Gear Solid (MGS, Kojima 1998 -), which is internationally recognized for its anti-nuclear rhetoric, self-reflexive gameplay, and narrative complexity.

Analyses are three-fold, focused on empirical intervention into socio-semiotic multimodality (Bateman, Wildfeuer, and Hippala 2017; Kress 2010) for fine-grained, multi-layered, analyses of game designs andsemiotic resources; and organized around the series narrative concluding MGS4: Guns of Patriots (2008). First, I apply multimodal annotations to elaborate how selected gameplay sequences connect interactivity and narrativity to create immersive gameplay experiences; and motivate anti-war discourse semantics on both installment and series dimensions. Second, I contrast changes in interface designs and their gameplay effects (MGS3 and MGS4) to address gamic influences on the use, design, and social implications of digital media (Ash 2015; Galloway 2012). Third, in discussing the MGS series’ exemplary critique of virtual war play (MGS2 and MGSV), I detail how videogames systematically construe ethical motifs and rhetoric via gameplay mechanics (Bogost 2007; Sicart 2013).

The presentation examines this through the series’ portrayal of human-technology dynamics within a speculative, networked war economy, exploring its post-WWII sentiments, reduced anti-Americanism, and transnational socio-political influences on videogames as a creative cultural industry. Ultimately, this case study emphasizes considering both materiality and political economy of videogames for comprehensive criticism; that a multimodality-driven methodology justly investigates meaning-making in videogames, informing further inquiries in areas such as popular culture, transmediality and intermediality research, and social impact game design.

The proliferation of media channels enables individuals and political sub-communities to manage and control the creation and dissemination of information, including advertisements that are personalized according to user profiles and false news stories which have been found to spread faster and more widely than true news stories in platforms such as Twitter. In this presentation, I consider the semiotic mechanisms through which contradiction flourishes in these media channels.
I first analyse Donald Trump’s domination of media coverage during the US presidential campaign. In presenting himself and his agenda, he made himself the focus of attention through strategies that invaded various semiotic spaces of others. The effects of this were that what he did and what he said captured the majority of media attention at the expense of his opponents which, aided by other campaign strategies, enabled him to win the election.
Following this, I present a multimodal approach to big data analytics aimed at tracking patterns of recontextualization across media. The approach is illustrated with examples from online extremist communications. The aim of the discussion is to highlight key questions of how meanings arising from the integration of language, images and videos can undercut or repoint fragments of discourses to promote more loaded, extremist and often contradictory formulations. 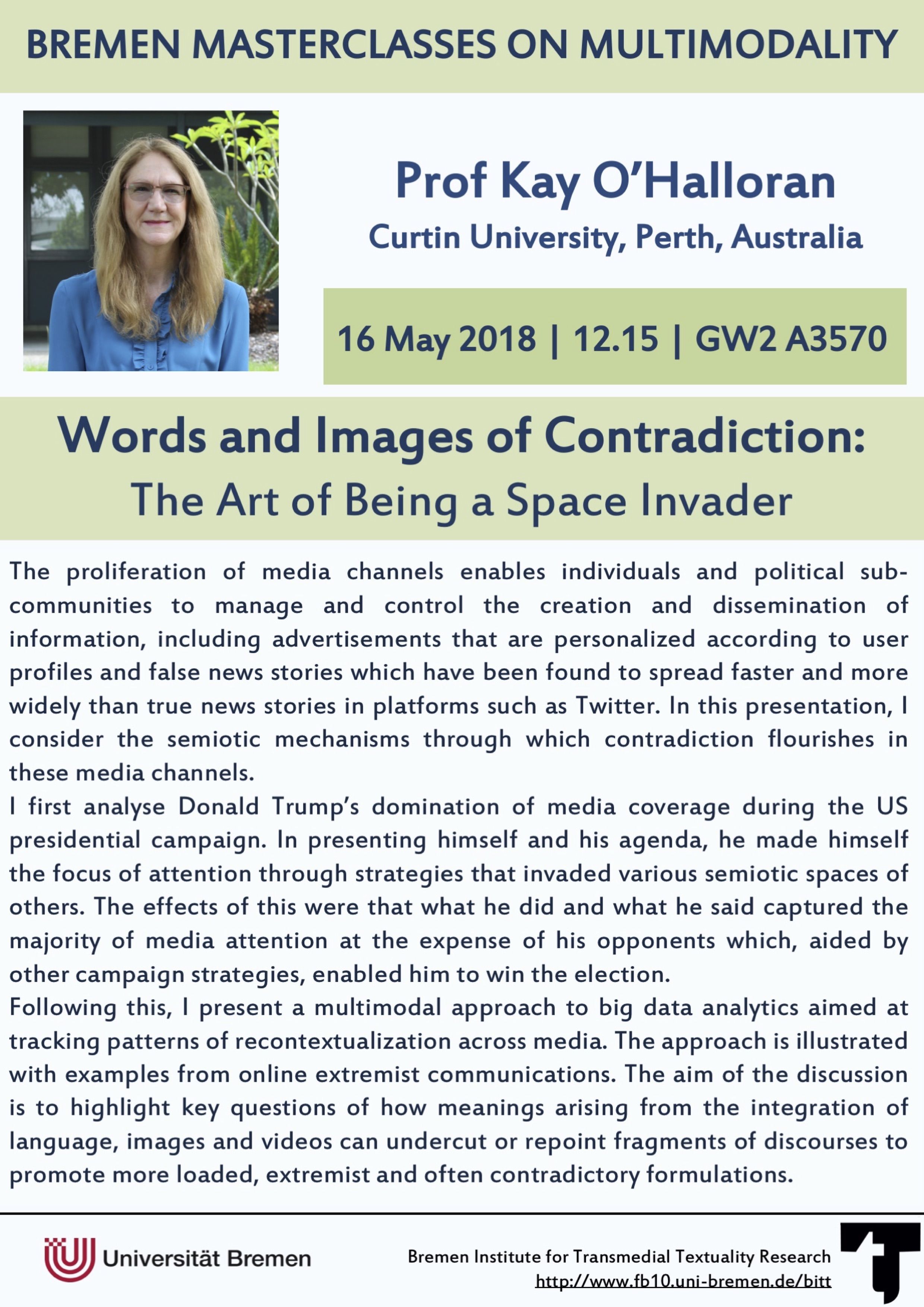